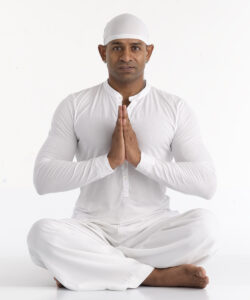 My father Dr. Rajkamal, is my first Guru. Because of his childhood propensity for frequent illness, his father, began to train him at age five in cardio, calisthenics, yoga and meditation in an attempt to improve his health. His father’s friend, an army boxer, and other martial arts instructors also taught him boxing, kung-fu and karate, thus building his stamina, speed and power.

Master Kamal or more commonly known throughout the world as Master Kamal, has risen in over thirty-five years of experience, innovation, technique and approach as one of the world’s uppermost elites in the all-encompassing field of yoga and yogic science.  His unique style is continually influencing yoga instructors and practitioners around the world by updating, spearheading and revolutionizing the teaching and practice of yoga for the modern society.

Master Kamal attended the Seventh Day Adventist School, but being naturally athletic, gravitated more toward boxing, martial arts, gymnastics and yoga. He would put in marathon sessions of karate and kickboxing training, eventually earning a fourth Dan karate black belt. His personal discipline and ability to apply himself unreservedly helped him to master difficult postures (or asanas).

Though Master Kamal practiced hatha yoga and meditation during his youth, his special interest in yoga increased after he sustained severe injury to his back and neck and tore ligaments in both knees during gymnastics.  Confined to bed for several months, he used yoga therapy to rehabilitate his body.  During this time he explored ashtanga, kundalini and Raja (or Royal) Yoga and meditation practices in addition to asanas (yoga postures).  He recovered so well that he was able to go back to preforming demonstrations of high-intensity yoga pose with ease.

He was influenced in his yoga education by Swami Mahadevananda of Sivananda Yoga and Vedathri Maharishi of Simplified Kundalini Yoga—both internationally recognized masters—as well as reading the Vedas and Patanjali’s Yoga Sutras, all thousands of year old ancient yoga-related documents.

He was initiated into the Highest Himalaya Tradition by his spiritual guru ‘Mahamandaleshwar Swami Veda Bharati’, a disciple of the renowned Swami Rama, founder of The Himalayan Institute and international author and teacher in his own right since 1947. 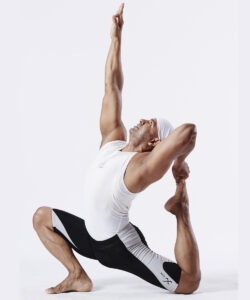 Master Kamal’s vision of yoga evolved into one that emphasizes balance, being neither too religious, nor too harshly stressful upon the body. He feels that yoga should be free from robotic yoga training and also free of the dogmas and conditions. He created a new age yoga system called, Kriyoga, [Kri means action, and yoga means union]. Kri Yoga is a unique blend of ancient systems and modern science] reflect these training methods. He created over 100 sequential classes for all ages and completely eliminated robotic yoga (one way fits all) practice. With this he developed Yoga for body types that clearly emphasis that one yoga practice is not for all body types. He believes yoga should be a constant state of living life fully and spiritually, or mindful living and the importance of self-study and self-awareness as a guide to expanding one’s consciousness. He is the first to introduce Infrared Hot yoga, an excellent method to instantly relive pain, inflammation, remove toxins, burn fats and also rejuvenates skin. He created special sequential methods that are time tested, safe and effective to do in Infrared rooms.